NightSuite is an installation created for Toronto’s Scotiabank Nuit Blanche 2014 that combines a nocturnal soundtrack with “live projections”: a form of light-based performance that curator Robert R. Riley once described as a “fugitive art form“. Even though the idea of intermedia goes back to the 1950’s (and even further back to the concept of “Gesamtkunstwerk“), this concept didn’t make a blip on the popular culture radar until the liquid light show emerged ubiquitously in the 1960s, and even then it was associated with an underground culture and largely perceived as being little more than “support” for rock bands of the era.
The overhead projector and live music  have a collaborative history that actually goes back to 1952 at San Francisco State University, when professor Seymour Locks discovered what happens when liquids are manipulated on an overhead projector stage in preparation for a special conference at the University. From there, Elias Romero carried this torch and performed liquid projections along with jazz performances at Beat gatherings until the acid tests and the ballroom scene began in SF in around 1966, and a new phase began.
The relationship between colour and sound is metaphorically inherent in the North Indian concept of “raga“. The exploration of this relationship has been at the forefront of lightsweetcrude’s concerns since this project’s earliest musical performances, nearly 5 years ago, accompanied by an array of overhead projectors loaded with psychedelic transparencies, and brilliant liquids, providing a spectrum of background colour. Since then, the colour has moved slowly to the foreground, and NightSuite marks the most concerted effort towards combining the sonic and visual in a live setting.

NightSuite will also be part of
*(cancelled due to illness)
*In The Soil Arts Festival in St. Catharines, Ontario on April 24th and 25th, 2015.
*Nuit Blanche North in Huntsville, Ontario, on July 11th, 2015. 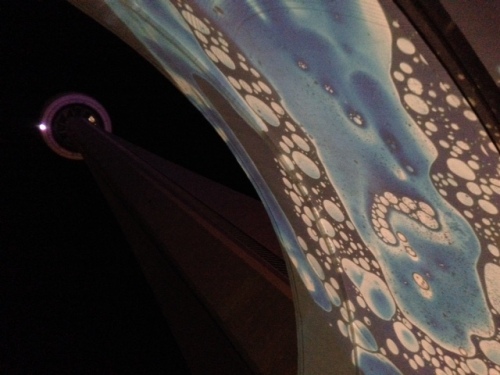